Close each round with a sl st in the first stitch of the round. Chain 3, these form the first double crochet of the new round. Turn your work after each round.
Each round begins and ends with a double crochet. These are not used for increasing.

Don’t fasten off, but continue with the edge.

Fasten off, and leave a sewing tail.

Use crochet hook 3,5 mm and red yarn. Chain 1 at the end of a round and turn.

Fasten off and leave a sewing tail.

Place the hat on the head, like shown in the picture.
Sew on the hat, use round 24 of the hat.

Fasten off and leave a sewing tail. Place the ogen between round 5 and 6 of the head, with 5 stitches between them.

Sew on the nose, in the middle of the head, under the eyes. Embroider a mouth with black yarn, like shown in the picture.

When you have three snowmen, it’s time to sew them on the skirt. Your tree skirt is divided in parts (like a pie). Place the first head on the third part, after te opening. Make sure there are five red rounds left under the head. The part where the hat begins, is placed on the white round. Sew on the white part of the head first. Stuff the white part and sew on the hat. Stuff while you go. Fasten off and weave in the ends.

Leave two pie parts and place the second snowman on the next. Leave two parts between the second and the third snowman.

You can see how the stitches are made in this tutorial.

This pattern isn’t mine. I found this diagram on pinterest, but I couldn’t find the original source.

Sew on the snowflakes between the snowmen.

That’s it! I hope you enjoyed this Christmas treeskirt crochet pattern. 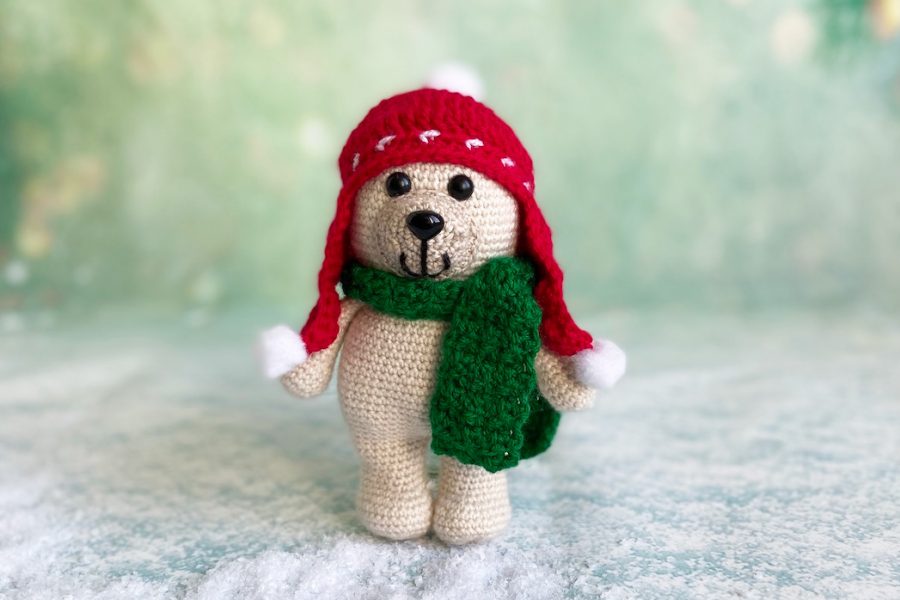